This research refers to two events that greatly impacted the history of design 50 years ago: the film “2001: A Space Odyssey” directed by Stanley Kubrick1 (April 2, 1968); and the first Moon landing during the Apollo XI Mission (July 20, 1969), mainly based on the ideas of John Houbolt2 .

The common goals of high visual and technological impact with relatively brief deadlines, led in both cases to a colossal multidisciplinary effort that reached extremes of quality and innovation in design, that are still remarkable half a century later.

Our scope consists in analyzing -in the manner of a chess game3 – the designs that underlie both events: the first one basically visual -based on scale models-, and the second one essentially technical, considering the important implications of surviving in extreme conditions.

The main objective is to look for common features, milestones and counterpoints in the designs developed by both project teams, using and reviewing the technologies of parametric modeling and digital fabrication. 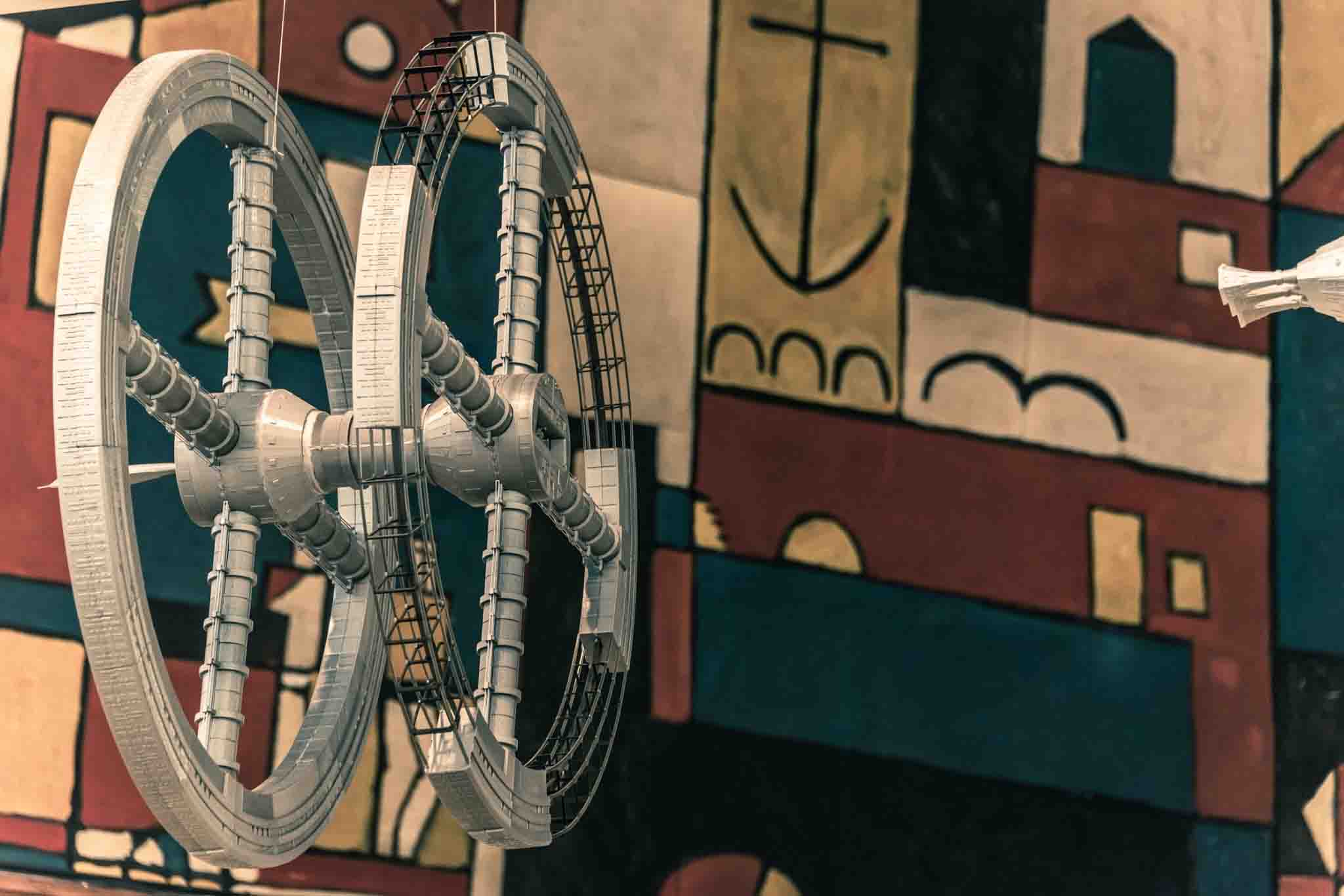 The film “2001, A Space Odyssey” reflects the concerns and hopes underlying at the end of the 60s, in the context of the Cold War, the Space Race, and the promises and mistrusts of the incipient incorporation of computer-aided decision making.

Kubrick carefully chose the team that would help him to carry out one of his first high-budget films. He reached for Arthur C. Clarke and convinced him to make “the proverbial ‘really good’ science-fiction movie“4, based on the story “The Sentinel” that Clarke had written in 1951.

As for the technical matters, he put up a team with the best possible master artists and craftsmen out there -headed by production designer Harry Lange- to take on the shooting of the spatial scenes, reaching levels of technical perfection which even today would be difficult to achieve. Most of the look and appearance of 2001 originated as small pencil sketches done by Lange.

The filming was conducted with some secrecy within the MGM studios in Borehamwood (England), working to tight deadlines so that its release could be in early 1968. Advances in Space Race, the arrival of Man on the Moon -NASA or soviets- and even the possibility of finding evidence of extraterrestrial intelligent life, could spoil the expectation that the movie was beginning to generate.

During a speech delivered by President John F. Kennedy, he promised: “We choose to go to the Moon in this decade and do the other things, not because they are easy, but because they are hard”5. The challenge was created: the US would put a Man on the Moon within a time frame of seven years. This seemed ambitious at that time and still appears to be almost impossible half a century later, even arising conspiracy theories about the reality of the matter and speculating with the intervention of Stanley Kubrick himself in the realization of “fake” video shots and pictures6 .

Technical problems were countless, most of them to be solved for the first time -including the guidance system and the navigator computer-, with the aggravating circumstance that any minimal failure could compromise the lives of the astronauts.

One of the main problems was the amount of cargo that was needed to reach to the Moon and how to push it there. This issue was studied tenaciously by John Houbolt, who finally convinced NASA headquarters -bypassing the chain of command- that the “only” solution was to split the journey in different stages, with various modules -command, service, descent lunar stage and ascent lunar stage- that would be alternately used along the way, needing several rendezvous in terrestrial (EOR9) and lunar orbit (LOR10), this one the most difficult.

Our research will cover all the geometric design of Saturn V, the giant vehicle that drove the required load to the Moon, analyzing all its components but mainly focusing on the Lunar Excursion Module (LEM), the stage that actually landed there.

This fundamental component for the successful completion of the mission was assigned to Grumman Aircraft Engineering Corporation, one of the numerous subcontracts that made possible the success of the colossal endeavor. It was a two-stage vehicle -descent and ascent stages- that was only used from the lunar orbit to the surface of the Moon, and back.

The conditioning factors of its design were very particular and demanding, since it had to be extremely light, minimal in size, very resistant, folding, dockable, maneuverable in vacuum and with lunar gravity (1/6 of terrestrial) and partially pressurized to 5psi (1/3 of the atmospheric pressure)11.

This paper will analyze all the steps by which its design evolved in its geometric aspects and practical use. With Thomas Kelly in charge during this process that lasted for years12, various proposals were evaluated and discarded until reaching to the definitive model, which represents one of the most efficient and remarkable products in the history of aerospace design.

This prodigious spaceship allowed six Moon landings, and in its finest hour -due to a severe damage in the service module-, served as “lifeboat” in the remaining mission (Apollo XIII), enabling Lovell, Swigert and Haise to return safely to Earth.

Leaving aside a great part of the countless aspects that can be analyzed in the film “2001” and in the “Apollo Mission”, the current research will focus especially on the ergonomics and geometric design of objects and living spaces.

Thus, we will study the contemporary designs that were included in the film, chosen by Kubrick for their innovation and “futuristic” appearance, such as the furniture designed by Olivier Mourgue, George Nelson, Geoffrey Harcourt and Eero Saarinen, and the cutlery by Arne Jacobsen, among others13.

The spaceships viewed in the film14, both in its exterior volumetry and in the main interior spaces, will be interpreted, modeled and digitally manufactured, through a deep analysis of the design criteria.

Kubrick feared that his models could be used again in upcoming films of lower quality, spoiling the legend he wanted to create, so he ordered the total destruction of the original physical models used during the production of the movie. For this reason, the film itself will be considered as the primary source for visual interpretation, complemented with the surviving original design sketches produced by the team of artists involved. This will be completed with written records from various sources -official and unofficial, online and printed bibliography-, blueprints and other validated graphic documentation.

The scale model´s color will be taken out from the film’s predominant palette, in shades of white, gray, black and red, in order to quickly associate each design to its corresponding source, during the expo that will be presented in mid-2019.

In a parallel way and looking for similarities in the design criteria, we will break down Kelly´s LEM cockpit design; its ergonomics, vision, overall needs and movement requirements, evaluating the results achieved in terms of efficiency in the use of the limited resources.

A mock-up of the ascending section of the LEM will be modeled at 1:1 scale during a workshop with architecture and industrial design students, using economic materials, cut and/or modeled by digital fabrication.

In order not to lose the general logics in which these objects/spaces were designed, the relevant physical elements involved in both cases will be geometrically modeled and materialized using digital fabrication. Different manufacturing and assembly techniques will be evaluated, comparing procedures, execution times, quantities of material used and quality achieved.

For all the elements represented to scale, a technical sheet will be prepared, containing the essence of the design, generation laws and constraints, along with all the characteristics that define it, both the real object and the model. From this information, a publication will be released, documenting the entire process.

With the outlook and instruments that the Fourth Industrial Revolution brings us, we will take the challenge to analyze and value -from the point of view of design- two of the most representative events of the Third Industrial Revolution in each discipline, that promoted aviation, the space age, cybernetics and the use of new materials, during the last 30 years of the twentieth century, remaining in the imaginary of several generations. 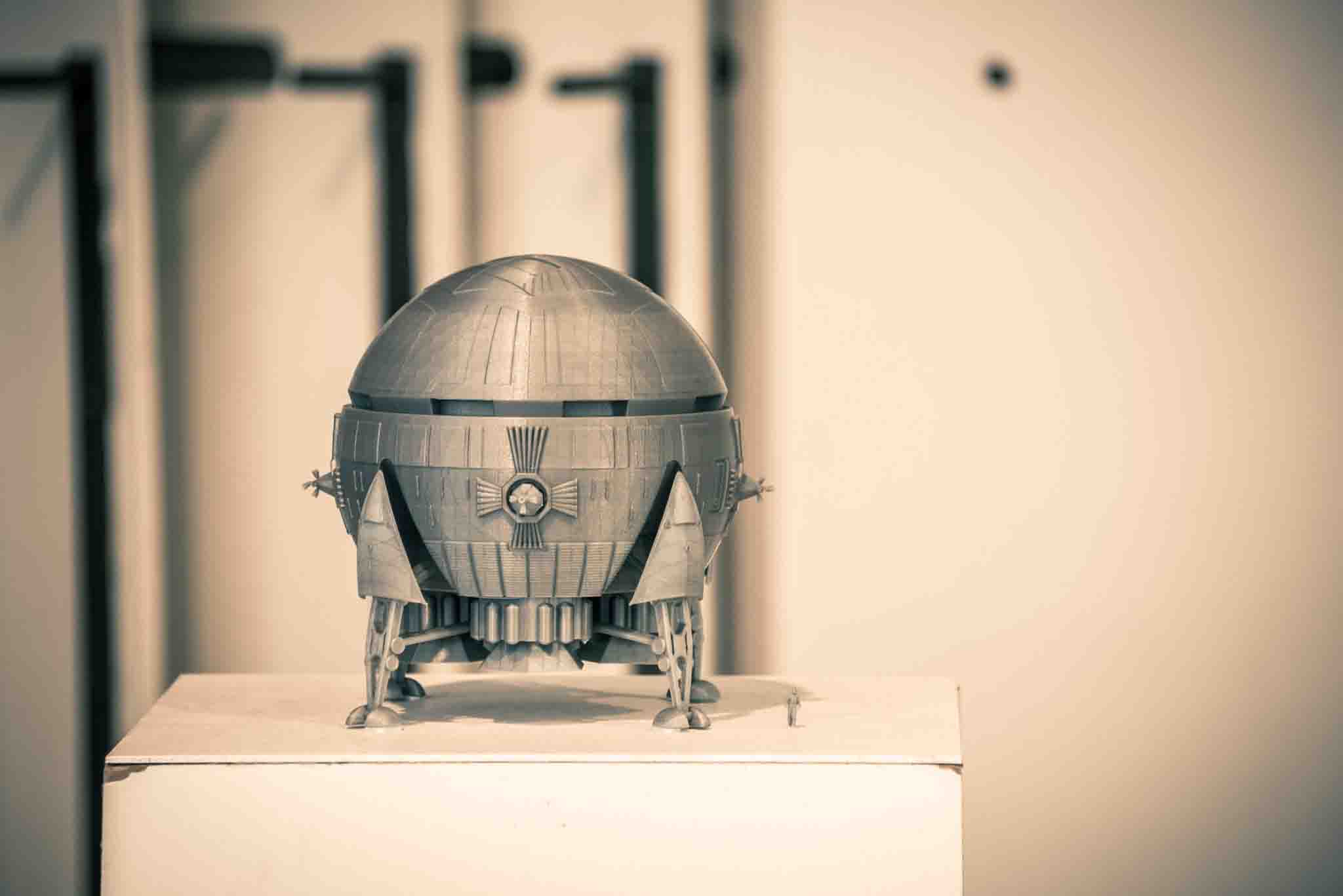 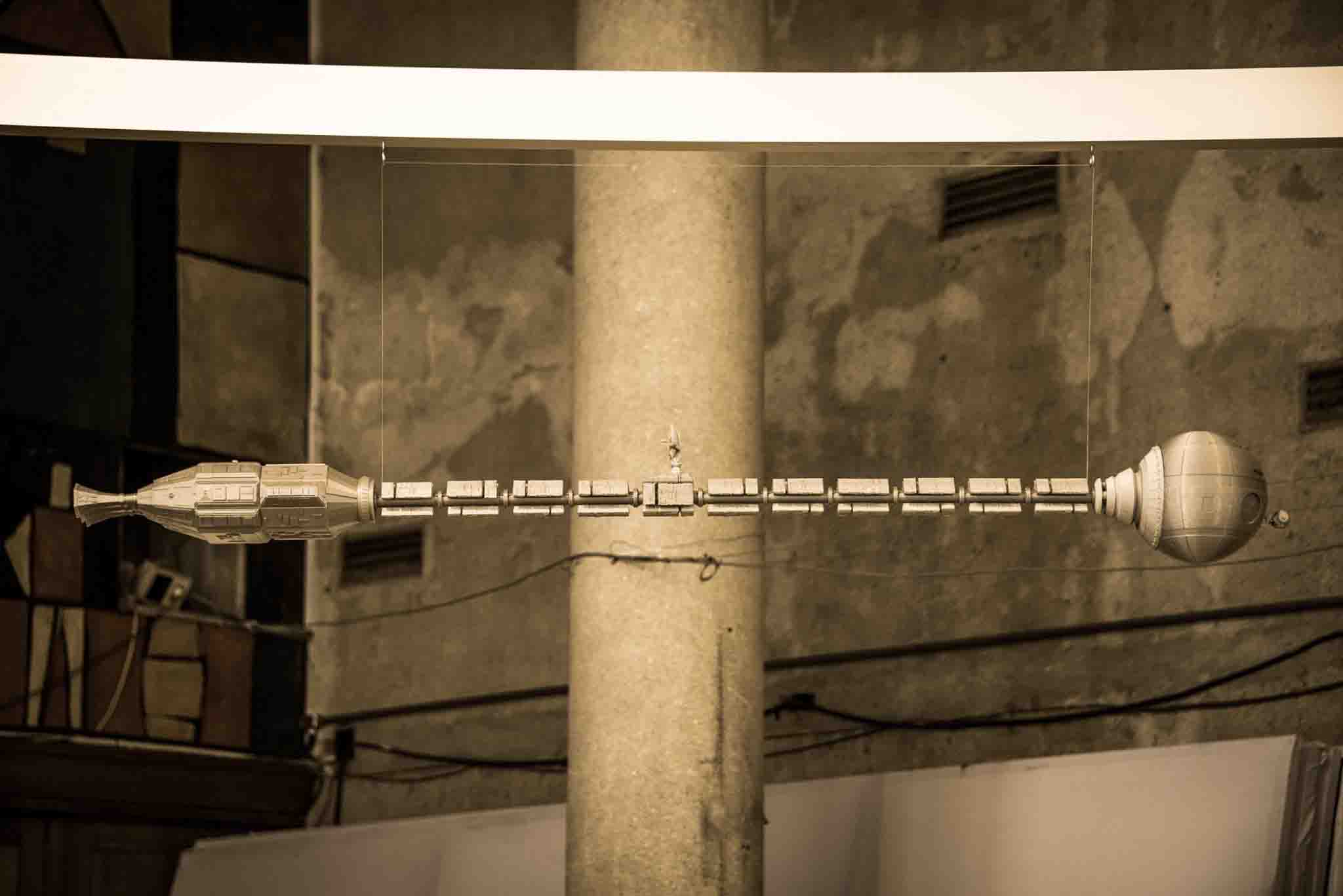 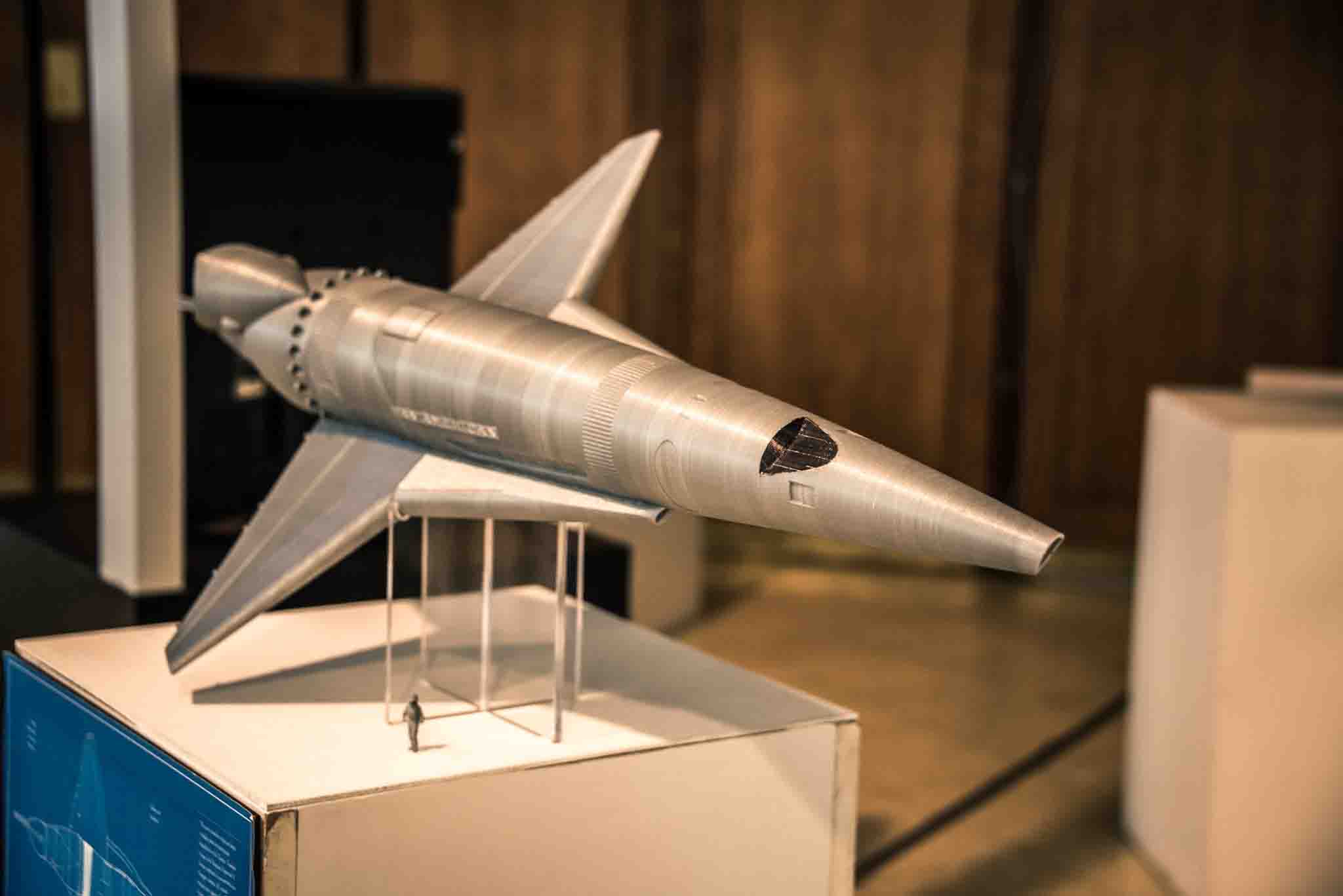 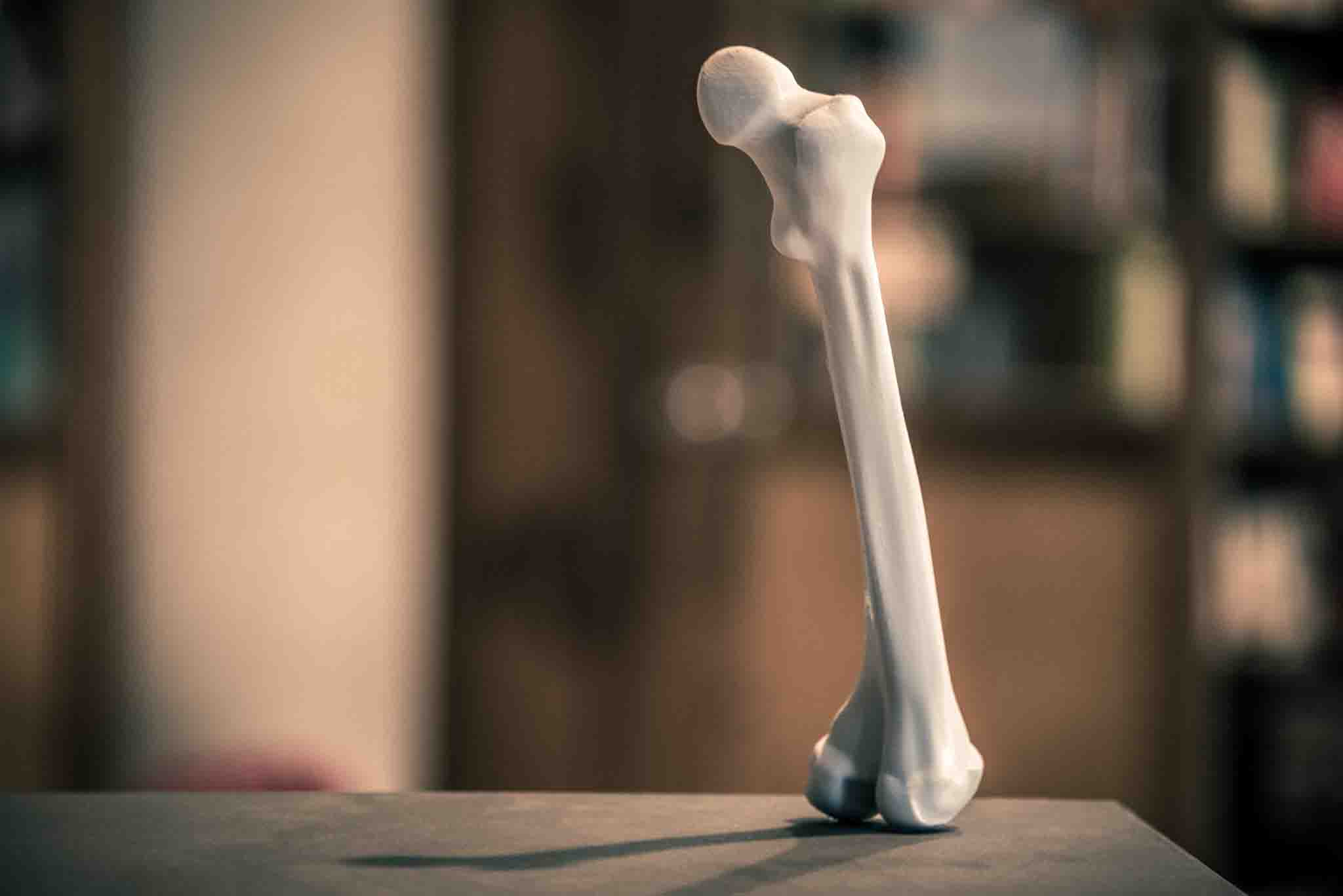 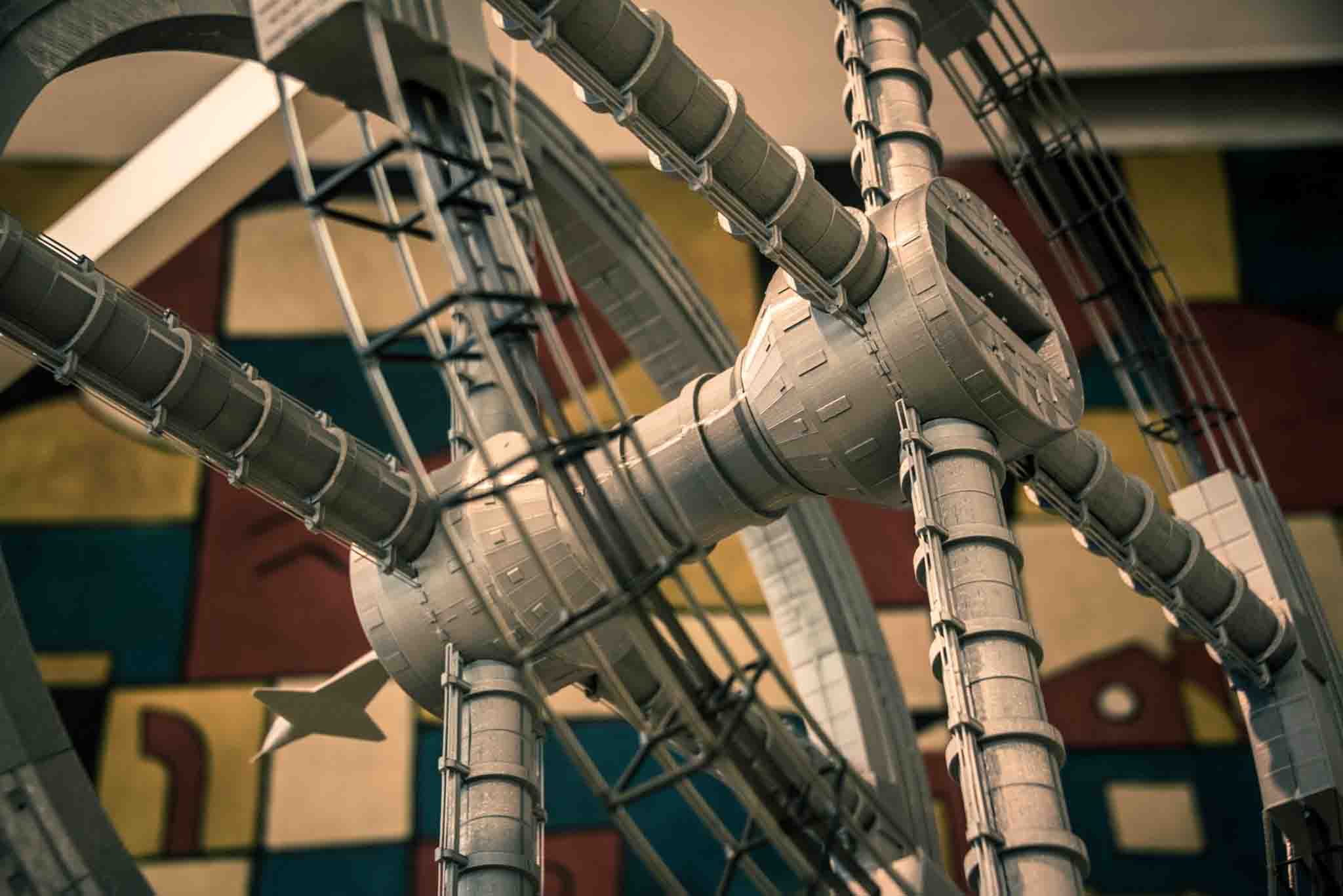 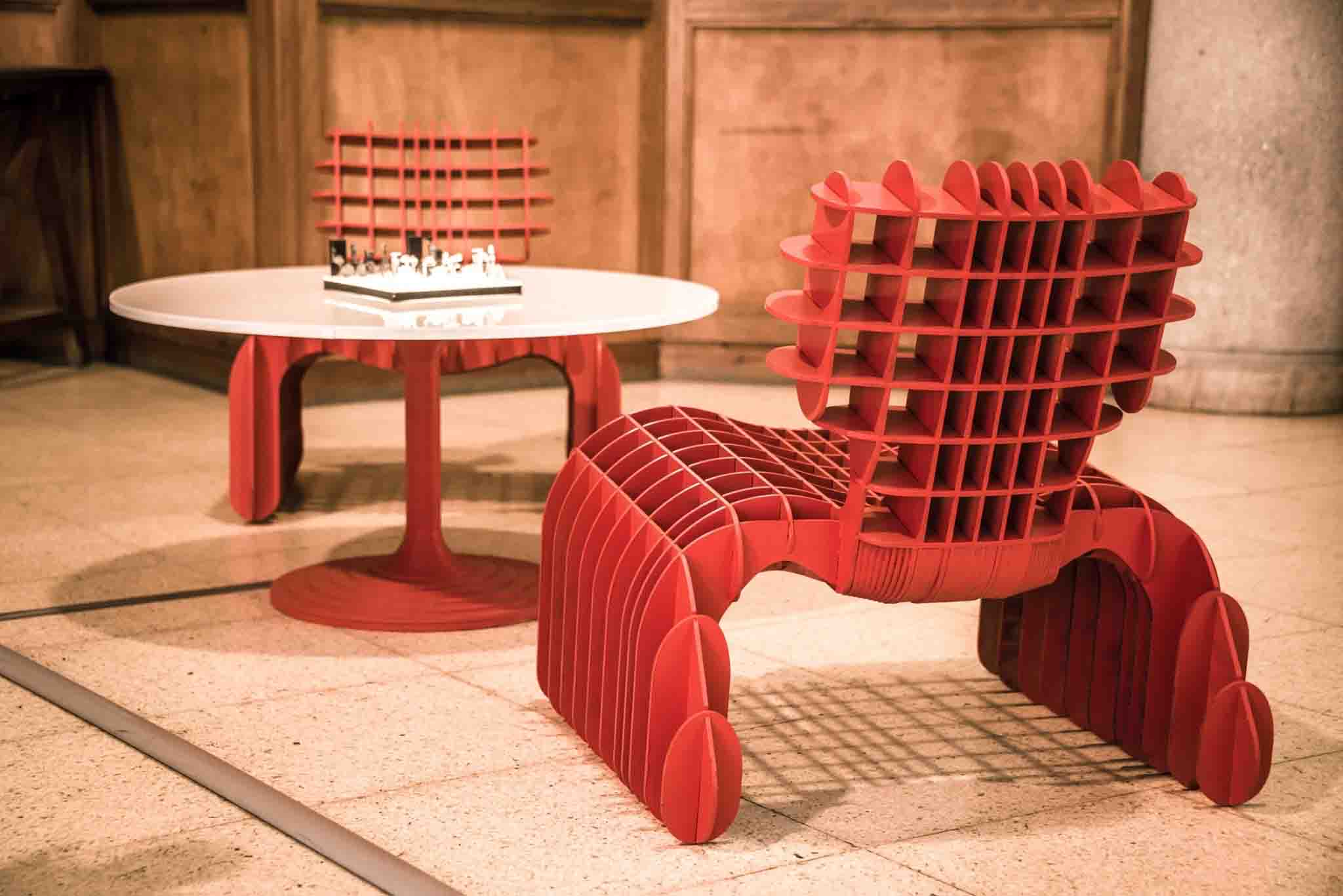 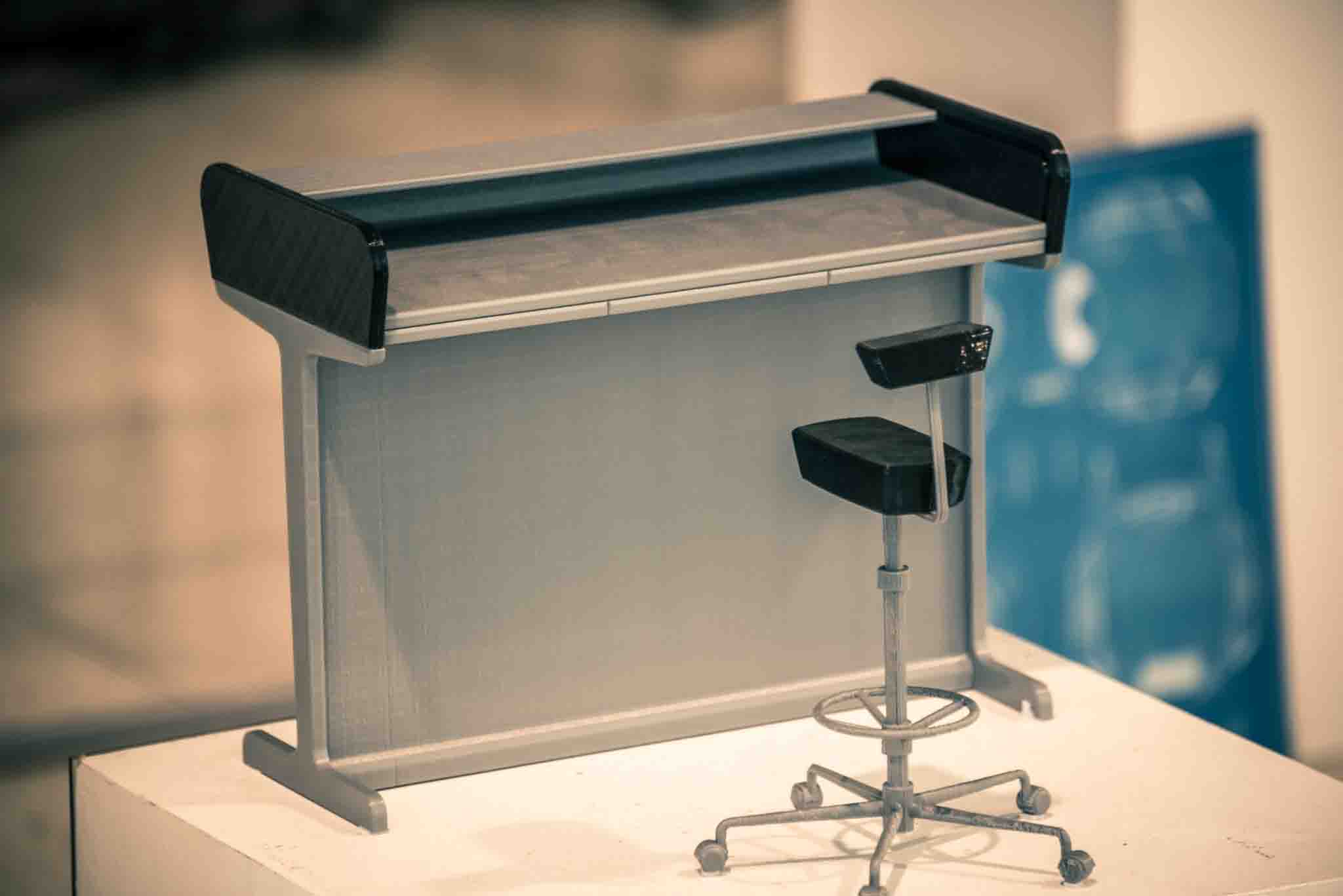 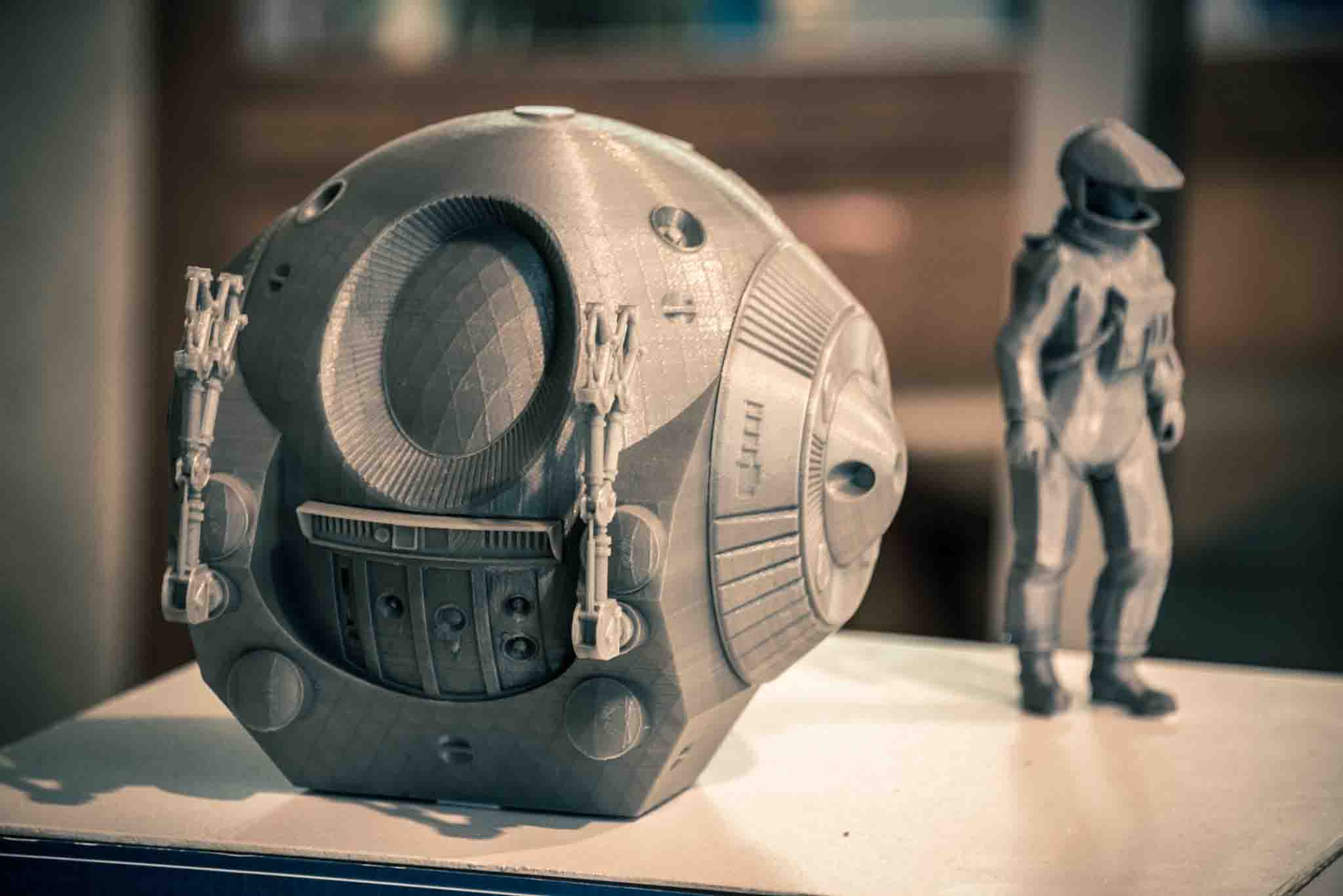